My Mom Taught Me To Love And Respect My Ancestors

As a young girl, we visited grandparents and relatives almost every Sunday. To both my parents, families are important. Every summer we attended several family reunions so we could become acquainted with all the aunts, uncles, and cousins.

After my mother found out her ancestors had purchased and settled Martha’s Vineyard, it was her dream to go there. In 2002, my mother and I flew to the east coast so we could visit that island. During that trip, we also visited the Plimoth Plantation in Plymouth, Massachusetts, where our Pilgrim ancestors, William Brewster and Henry Sampson settled in 1620.

In October 2007, even though my dad is gone, my sister and I wanted to meet his distant relatives, so we took our mother, and attended a family reunion in Virginia. The Agee family escaped persecution in France and came to the American continent about 1690, settling in Virginia. Those who planned the reunion, arranged for the entire family to go to the old Huguenot, Manakin Episcopal Church, which was a small white chapel with stain glass windows. 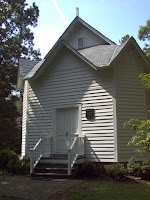 I’ve always been fascinated as I listen to stories about my grandparents who crossed the plains with the early Mormon Pioneers. I come from a long line of pioneers and admire each of them. My mother has spent many hours collecting each of their stories and putting copies into a book for each of her children. Because of her efforts our family knows about our heritage.