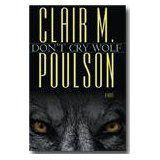 This book captured me in the first chapter and kept me turning pages the entire time. It called me away from other activities because I had to know what was going to happen next.

The back cover gives a hint of what is to come when it tells everyone that Deputy Prescott gets a call directing him to an accident. As he approaches the twisted, mangled remains of the vehicle, he doubts there could be any survivors in that wreckage. Somebody's life would be ruined tonight, he just never thought it would be his.

Overwhelmed by the memory of losing part of his family, he decides to take the sheriff's offer to become a detective instead of continuing to patrol.

A year later, wolves are starting to drift from neighboring Yellowstone Park to Montana ranches and are preying on calves, and a group of activists is passionate about saving the wolves from getting shot by ranchers. Their passion turns to violence with the murder of a rancher who shoots a wolf in order to protect his livestock. It is up to Deputy Prescott to find out exactly who is behind the escalating violence.

The book is filled with suspense, and romance. It's a book that I'm glad I read.
Posted by C. LaRene Hall at 10:01 AM

Excellent review. It just might go on my tbr pile.