The Assassination of Governor Boggs, a Historical Novel by Rod Miller 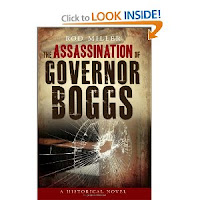 This story takes place as detective Pogue, of the Pinkerton National Detective Agency steps into a hair-raising mystery and tracks down Governor Boggs’s enemies and friends to determine who really shot the past governor. He begins the story by telling us that Lilburn Boggs was never the same after getting shot in the head. News of the assassination spread quickly, but the news was premature because he lasted the night and nearly eighteen more years.

Rod Miller has written many essays, magazine articles, book reviews, and anthologized short stories, and poems. I can tell he did his research while writing this book and he didn’t leave any trail unturned. I learned more in this one book than I have heard in many years. Several years ago I read the biography of Porter Rockwell, by Richard Lloyd Dewey. From reading both books I have drawn my own conclusion and that is that Mr. Rockwell became the scapegoat of every mysterious incident that happened during his lifetime.

I love the personal part of the story with detective Progue buying small horses on his travels through the west for his young daughter’s collection. He was a likeable guy, not in a hurry, but thorough in his questioning. He also didn’t seem to be influenced by other’s opinions.

I enjoyed the descriptions of the rhythmic clack and hum of wheels on the rails and the abandoned town of Nauvoo. Because of the many images Rod painted it put me right into the story. He also has the ability to help me see the individuals in the story as he talks about the tousled hair, and a gaunt whiskered face. The trip into the Salt Lake valley seemed real as he was jostled over the mountains and plains, lurched up an incline, chocked by Red Desert dust, and the bone-jarring ride down Echo Canyon. I appreciate the fact that Miller found documents that I had never read before, such as the extermination order given by Governor Boggs.

Brigham Young states that in his his opinion Rockwell's innocence is "a certainty- if only, for no other reason, that Boggs survived. Had Port fired the shot, that would not have been the case."

I always love books that include in the back discussion questions. I know that this helps book clubs in their debates about the book. I can tell that Rod really thought through these questions. He doesn’t give us the answer but instead gives us something to think about. I particularly love the last question Do you think Porter Rockwell did it?

I am sure that anyone interested in history during this time period would love this book. I did.
Posted by C. LaRene Hall at 8:04 AM