In 2006, my sister and I took a trip to Scotland. I had never been that far from home before. The day after our arrival, we headed out on the motorway towards the Isle of Bute, by way of the Dumbarton Medieval Castle.

The word Medieval enchanted me. I had never gone to a castle before and I could hardly wait to arrive. The first thing I saw was the high twin peaked volcanic rock. I had no idea what was in store, and how many stairs I would climb. Still it was a fascinating experience and well worth my time. 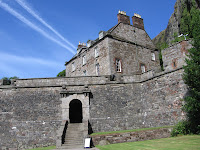 After entering the main gate, we climbed a hill. Once on top of the rock (not the very top) I looked over the stonewall, and watched the River Clyde and the River Leven below. I’m sure this was a safe place during war, and wondered how anyone could climb the steep rock to attack those inside. Behind me stood the remains of 13th and 15th century fortifications, and the 18th century Governor’s House, which stood on a volcanic outcrop of rock.

It’s tempting to tell you the history of this castle, but not everyone enjoys history as much as I do. I was standing in a place that dated back to the dark ages. The Romans and Vikings once stood here. We climbed and climbed, but never reached the top. Both of us decided we were too old to do this and it would take all day. Since we had other plans besides climbing stairs all day we left and drove to Calentravie to catch a ferry that would take us to the Isle of Bute.

Once on the island we headed toward the center of Rothesay where an early 1200s circular courtyard castle stood, surrounded by a moat. The fortress seemed out of place in the center of a busy modern town. Surrounding the castle was a large wall with a round tower in each of the four corners. The entrance was across a drawbridge. 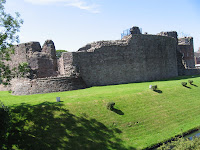 Neither of the castles we visited that day were anything like those in fairytales, and they weren’t as elegant as those you see in books. To me they held a different sort of charm, and were magical in an unusual way. These fortresses were full of history and its fun for me to imagine the men protecting what they had worked hard to obtain.
Posted by C. LaRene Hall at 5:29 PM

Connie,
Wow, that sounds so fun. I'd love to go see castles. Although, I have to admit I'm glad I don't live in one of those cold, drafty places! :)

And I wanted to tell you, thanks for stopping by my blog and commenting on "The Germ Theory". I'm sure glad you didn't catch the bug from your RS teacher.

Wow, I love those pictures! I'd love, love, love to go on a trip like that and see some real-live castles.

The cold doesn't sound as fun, but it does sound like a great place to visit.