Last year I went to Williamsburg, Virginia for the second time. This time it was my mother and me and no little kids to keep track of. Before going, I researched the many things available so our trip would be worthwhile. I love history and wanted to grasp every piece of information I could concerning where America began.

Before our arrival in Williamsburg, I reserved several attractions for me and my mother to attend. The first evening, after dark, we took a walking tour Legends, Myths, and Mystery by lantern light and visited historical parts of the city such as the palace. At each place we visited, the tour guide told ghost stories that have passed down from one generation to the next.

The following day we watched a performance at the Crystal Concert, with the world-famous Dean Shostak, playing an instrument invented in 1761 by Benjamin Franklin called the Glass Armonica. This instrument consisted of tuned glass bowls mounted on a spindle. Mr. Shostak made the glasses spin by turning a flywheel connected to a foot treadle. He played music by rubbing his moistened fingers on the rims of the glasses.

Also featured in the show were many rare and antique glass instruments from all over the world such as the Glass English Hand-bells, an 1823 American Glass Grand Harmonicon, a Cristal Baschet from France, and my favorite, a glass Japanese violin.

That evening we attended a performance called Cry Witch. We went to the State Capitol and they chose my mom and me to be on the jury at a witch trial held in 1706. We observed the anguish of Grace Sherwood, accused of witchcraft. The rumor was that she had exercised supernatural powers to cast spells and she was bewitching people. The trouble started seven years ago – her neighbors said she cast evil spells upon them. They invited the jury to question the witnesses, weigh the evidence, and determine the guilt or innocence of, “The Virginia Witch”. 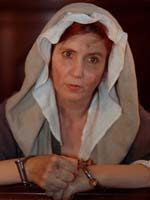 I loved watching the men and women dressed in costume as this trial took place. They brought forward the accused, a middle-aged woman, dressed in a black dress and a white apron. The accusers, Mr. and Mrs. Hill sat on the other side of the room with an attorney. They accused Grace Sherwood of casting spells, making cattle die, and destroying a crop of cotton. Elizabeth Barnes told everyone that Sherwood assumed the appearance of a black cat, and entered her sleeping room, drove her from her bed and whipped her, then disappeared. Grace Sherwood said she was innocent of all charges. After they presented all the evidence, much to my disappointment, the jury found her guilty.

The court sentenced her to a "trial by water". With a trial by water, they cross-bound (right thumb to left toe and left thumb to right toe) the witch and deposit her into the water. If the suspect sinks and drowns, they find her innocent of witchcraft. If the accused floats and survives, she is guilty of conspiring with the Devil.

Participating and observing these performances in Williamsburg made me understand and know how they did things in early colonial time. It made me appreciate the beautiful country that I live in and the many men who founded this free nation.
Posted by C. LaRene Hall at 4:44 PM

Wow, what a neat thing to participate in. I'd love to see something like that. And what a sad thing the people did to innocently accused women.

I love to read stories of your travels. You always find the funnest, most interesting things to do.

Enjoyed your blog. I'll have to remember this one for my historical writing research.

What a neat thing to be a part of, Connie.
I've been to Colonial Williamsburg too. The thing that made me laugh was that they had a forge where the blacksmith was using equiptment that was a century old. I recognized it from the farm where I grew up an watched my dad use it as a little girl. Man, I didn't think I was that old. We had an outhouse when I was little too. My kids think I'm from another galaxy. Actually, it's just another country.
Keep writing. Your blog is fun.