I guess I inherit my love of parades legitimately. For as long as I can remember my parents loved parades. As a young girl, I remember watching my father riding in the back of a pickup (a Boy Scout float) flipping pancakes as they moved down the parade route in Provo.
After we had a TV, every Thanksgiving Day our family watched the Macy Parade on television, and then on New Years Day we watched the Rose Parade. I never imagined I would be able to see either one of them in person, but in 1975, my three children, my parents, and I went to California to watch the parade. Two of my sisters were marching with the Kearns High School Cougar Marching Band. One played the bells and the other twirled a flag.

The Rose Parade was wonderful and the sixty-one flowered floats were as beautiful, as I had dreamed they would be. I found a picture of one entitled International Peace Garden depicting 200 years of peace between two great nations. As is the rule for all entries, thousand of roses, and other flowers covered the float.

Along the parade route the night before, hundreds of cars drove up and down the street, honking horns all night long. This was a parade in itself and though it wasn’t beautiful, it was entertaining. Later, I read that this was the worst behaved crowd they had ever seen. I thought it was great, although my small children had a hard time sleeping.

In Salt Lake City, we have a celebration with a parade every July 24th. After the city decided that people could stay overnight on the route, my father always took chairs and saved seats. Many memorable nights were spent visiting with him as we sat together to make sure our family could have a good place to watch as the parade passed in front of us. Every year I look forward to seeing the beautifully decorated floats in Salt Lake. I’ve help decorate a few and know all the hard work that takes place so someone can enjoy a great parade.

Last year while planning a vacation, I learned that in Shenandoah, Virginia we could see floats from the Rose Parades, Presidential Inaugurals and other national celebrations at the American Celebration of Parade. Inside the building are floats of all kinds. Some are funny, others beautiful, some amazing, others stunning, and some are for children. I took about 20 pictures of the floats, and I’ll include a few of them for you to see. If you enjoy parades, maybe someday you can go visit this incredible place. 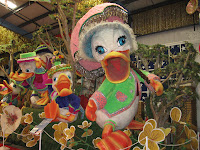 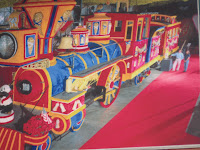 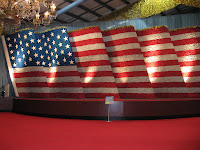 I love parades too! But unlike you, I've never built a float. That's a project I don't know if I could take on. I am amazed that you have done it so many times.

Connie,
Great shots of the parades. They were really fun to see. And you're a sweetheart, to be willing to help so many people with floats!