End of the Road

In 1992, my husband and I flew to Alaska. We spent the first day looking around Anchorage, and the next day we drove 225 miles to the “end of the road town”- Homer. This town is as far west as you can drive and still be on the North American continent. The scenery as we drove on the Seward Highway was spectacular and we could see in the distance the Portage Glacier and the slow river of blue ice on the lake.

Once we reached Homer, moose were the first things I saw. I was so fascinated that I immediately had Jack stop the car and I climbed out and started taking pictures. Jack kept calling, “Don’t get so close.”

I ignored his words and crept closer and closer. They are certainly ugly creatures, but the pictures I took are impressive. After this experience I heard many horror stories of how these intimidating animals have attacked people. I had no idea they could be dangerous.

After checking into a bed and breakfast, we drove to the Pratt Museum. As we wandered around, the manager approached us and said. “I have something in the backroom that I’d like to show you.” 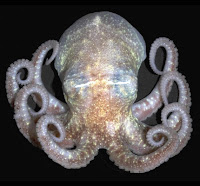 Reluctantly, I followed to see what he was up to. In a small water tank, there was a small soft-bodied sea animal with a round body. It was close enough to touch. He explained that if a hole was as large as its eye, it with all eight arms (tentacles) could get through to the other side. Never had I been this close to an octopus.

Jack and some friends planned to go deep-sea fishing the next day, and since Homer has long been known as the "halibut fishing capital of the world", this is where they wanted to come. After the men were off for the day, we women went shopping and strolling along the beach.

The time spent at the long sandy beach was incredible. I loved watching the breathtaking eagles flying up and down the shoreline as we sat on the seashore taking in all the beautiful sunshine. This beautiful creature never tired. Up and down it flew with its wings flapping and its body soaring through the air without a care in the world in a spectacular aerial show.

The three men returned with two halibut each (the limit) which we took to the processing plant. The plan was to have the fish ready to ship home by dropping the packages at the airport in the morning. We kept enough for a barbequed dinner.

If it weren’t for the prospect of going on a cruise I would like to have spent more time in this quaint quiet town. The beauty was magnificent.
Posted by C. LaRene Hall at 12:07 PM

Connie,
What a wonderful vacation! And your pictures are great. It makes me want to go to Alaska!

Oh my word, I can't believe how close you were to that moose! Amazing pictures, Connie. I think Alaska is pretty far down on my list of places to visit, mainly because I hate the cold, but wow, it sure looks beautiful.

And I adore natural beauty like that. So, maybe I'll go someday.