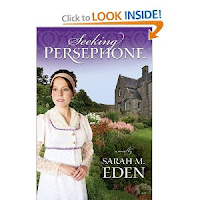 Last year at a writer's conference I took a class from Sarah Eden. I enjoyed the class and was sure I wanted to read a book by her. It took me almost a year to get around to doing that, and found I was glad that I had put it on my list of books to read. Following is the information on the back cover and my thoughts about the book.

When Persephone Lancaster receives a marriage proposal from the ill-tempered Duke of Kielder, she refuses – and then reconsiders. The obscene sum of money he’s offering Persephone would save her family from ruin. With her characteristic optimism, she travels to the far reaches of Northumberland to wed a greatly feared stranger.

Lodged deep in a thick forest infested with wild dogs, the Duke’s castle is as cold and forbidding as the Duke himself, a man with terrible scars on his body and his soul. But the Duke’s steely determination to protect his heart at all costs is challenged by his growing attachment to his lovely and gentle bride. With caring persistence, Persephone attempts to pierce the Duke’s armor and reach the man beneath. Yet he cannot tolerate such exposure, and his repeated rejections take their toll. But when grave danger arises, the Duke realizes he must face the risk of revealing his true feelings or lose the woman he cannot live without.

It was fun reading a story about an arranged marriage and I wondered if the Duke would ever realize what a fine woman he had tricked into marrying him. I couldn’t believe how patient she was with him. He would sometimes treat her so kind and then turn on her for no reason. Sarah did a good job with the characters in this book. They were so real and I had to keep reading to see what would really happen to Persephone. I knew the Duke cared about her, but she had no idea about his true feelings. It was a great story and I enjoyed it and look forward to reading her other books.
Posted by C. LaRene Hall at 12:18 PM