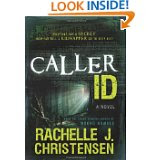 Following is the words on the back cover.

When twenty-three-year-old Courtney Beckham, the privileged daughter of a highly successful land developer, is abducted in the mountains near her home, FBI Agent Jason Edwards investigates the ten-million-dollar ransom and turns up more than just a kidnapping crime.

And when Courtney catches a glimpse of the caller ID in her kidnapper’s home, what she sees sends ice through her veins. Even if she escapes her captors, something much more dangerous lies ahead.

From the author who brought you Wrong Number comes another story featuring Agent Jason Edwards that will keep you on the edge of your seat.

I’ll bet that makes you want to pick up the book right now. Remember there are several ways to win a copy, but you really won’t be sorry if you were to rush to the store now to purchase this book.

Even though I had read parts of this amazing book beforehand and I knew some of the story I still had a hard time putting this aside for other things. I read the entire story in record time.

There were many twists and turns along the way and lots of surprising things taking place. Just when I thought there couldn’t be any more danger for Courtney something new happened to add more tension to the story.

I could feel the betrayal Courtney must have felt during the kidnapping when she saw the name on the caller ID. I also thought there was just enough hints at romance to keep the story interesting. Several times when I was sure I knew what was going to happen next something new happened to put an entire new curve to the story. I can assure you, the story isn’t over until the very end.

If you like mystery, suspense and romance, this is the next book you need to read.
Posted by C. LaRene Hall at 8:24 AM

I'm waiting for my copy to arrive in the mail. Grrr

Thanks, Connie for the great review! So glad you liked it! :)