In my area many years ago, it was popular in the church to attend musical firesides with well-known artist. Most the youth and young single adults spent Sunday evenings traveling from one stake to another listening to the beautiful music, testimonies, and life experiences of these famous LDS singers. With my young teenagers, I attended many of these gatherings.

Through this and other experiences, I have met many important people. Some of them I met because I was in charge of finding people to speak at stake firesides. I worry about leaving some of them out because I haven’t always kept a great journal. Sometimes my life has been so busy I hardly had time to live it, and although I love writing, I didn’t always write about the things I was doing.

One of the most memorable firesides for the youth in our stake was the time they were able to perform with Michael Webb at his studio, in a play, Marvelous Light. We live on the west side of town and don’t always have all the updated equipment necessary to put on such a performance. Our lighting was bad and we had no microphones for such a production. Still this was going to be a fun experience. After all, Michael Webb was going to come and sing with them.

This was on April 18, 1993. Some of the young people had speaking parts, and some sang solos, or duets, or participated in a choir. For weeks, they attended all of the rehearsals. The stake president didn’t want me to take them out of the area to perform. It didn’t matter that some of their parents were driving them and I had permission slips signed by all of their parents. I thought I might lose my membership over this experience, but I fought tooth and nail for this once in a lifetime opportunity for them. I’m sure I don’t have to tell you that the performance was spectacular.

On October 20, 1996, Chris Heimberdinger, the author of the Tennis Shoes Adventure series as well as many other books for youth and adults spoke at a stake fireside. Besides being an

impressive fireside speaker, he is also a remarkable teacher. I took a novel writing class from him in September 1998, and appreciate the fantastic help given to me in that class.

I was certainly surprised that a man as important as Michael Ballam, 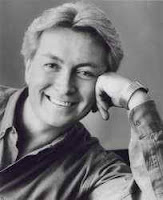 would consider coming to our stake. We were not disappointed as he told stories about his family, the gospel and shared his beautiful voice with us.

My stake was especially blessed the evening that we were fortunate enough to have Lloyd D. Newell

of The Spoken Word speak to us on February 16, 1997. His life experiences and stories about the choir were great.

The artist, Chad Hawkins, came to our stake on March 16, 1997, to speak about his talent and show us some of his beautiful temple pictures with the hidden images.

He began his series of temple artwork in 1989, at the age of seventeen, to support his eventual two-year mission in Frankfurt, Germany, for The Church of Jesus Christ of Latter-day Saints. When he returned from his mission in 1993, he continued with his artwork. Since hearing him speak he has gone on to publish a book, The First 100 Temples. He has also done work for the governor, the legislature, and the University of Utah. I cherish the artwork in my home done by Chad Hawkins.

The list of people I’ve met goes on and on, but I know I’ll leave many of them out. Here is a short list – John Bytheway, Roger Hoffman, Janice Kapp Perry, Steven Kapp Perry, Joyce Quinn (actress in Legacy), Barbara Smith (former R.S. pres), Michael Stewart, Brenton Yorgason, and Margaret Young.
Posted by C. LaRene Hall at 8:04 AM

Congratulations, Connie, you're the winner on my book-blog-tour! You commented on Shirley Bahlmann's blog review of my book, "Dawn's Early Light," and your prize is an autographed copy! Please email me at lclewis2007@gmail witn your mailing info and I'll get that out right away!