Our trip to visit the many churches in England is almost over. We still wanted to see where our great-great grandfather Thomas Mayhew came from. After following the map to Tisbury, we located the old church, and visited with the priest who said, “I have something to show you inside.” 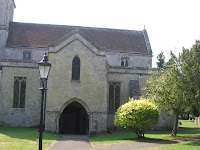 Once inside, he opened a short door located behind his desk and said, “This steep narrow staircase was used each night for hundreds of years by the priest to go up to the tower to sleep.”

Even though the steps were made of stone, I noticed the inside of each step so worn, that the inside was only a few inches thick while the outside of the step was larger. I’m short, and since the space was so limited, I think it would have been difficult to climb to the room above. He told us, that no one uses the stairs any longer.

In addition, he showed us a brass marker on the floor and said it was probably there at the time the Mayhew’s lived in the town. He allowed us to take pictures of the stain glass windows and the other fixtures in the church. 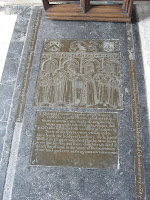 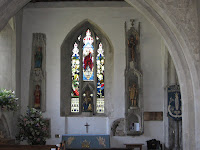 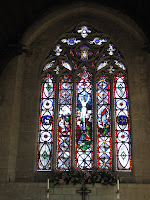 Since the early days of the church, an addition has been added. He also told us that the house across the street is probably one of the oldest houses in the town. The church has been changed from the Church of England to a St John’s Baptist church.

We then drove to the village of Dinton, where we saw another small church. We went inside and took a few pictures. There were many headstones in the graveyard, but the oldest one I could read was in about 1786. Many of the tombstones were not legible – they were old and had moss growing on them. 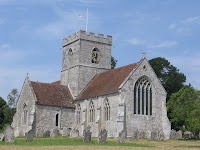 Next, we went to Salisbury to see the cathedral which is the tallest structure in England. 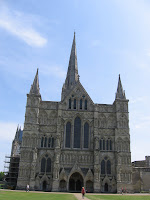 We went to the Winchester Cathedral, built in the 7th century. It is the burial place of saints, kings, bishops, and writers. The ceiling has many sculptures, and there are many stain glass windows. Also located inside is an impressive collection of ancient wall paintings, medieval floor-tiles, modern sculptures, and artifacts that seem to make the intriguing past come alive. 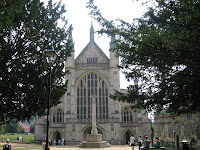 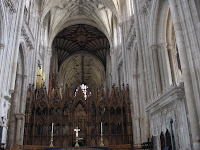 Thanks for visiting my blog on the churches and cathedral in England. I wish I could have shown you all the pictures and told you about all the wonderful things I saw. Visit next week and I'll show you a picture of the home where a famous writer lived.