Next, we drove to Coventry where we climbed the stairs to see the Cathedral. 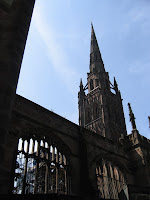 While still in Warwick we went to the historic Collegiate Church of St Mary (the Thomas Beauchamp Chapel), that was built in 1086. It passed into the Beauchamp family about 1268. Thomas Beauchamp, planned to replace the 12th century church with a much larger structure. They extended the original crypt before his death. 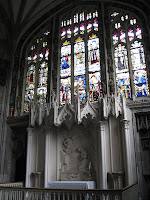 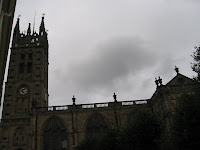 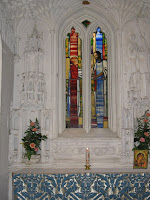 To me, the most impressive feature in this chapel was the Tomb of Richard (1439) and Thomas (1369). I was particularly interested in seeing these tombs because they are my ancestors. 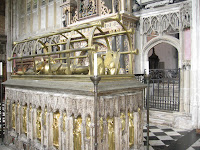 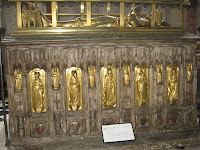 Richard Beauchamp, wanted his marble tomb built in the center of the Chapel. In his will, the final phase of medieval construction work was the Chapel of Our Lady, which took 20 years to complete. His wife Katherine Mortimer, is buried next to him. The tiny figures around the base of the tomb give a fine display of 14th century English fashion. Around the sides and ends of the tomb are the figures of 36 mourning relatives. 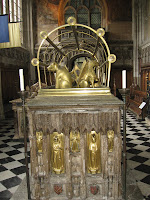 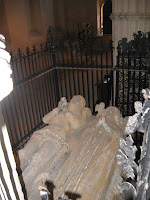 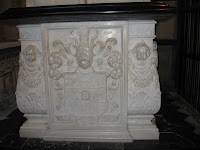 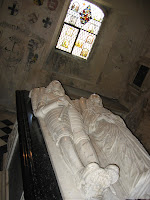 The Hungerford family is also ancestors of mine, and I enjoyed looking around the walls at the many wall paintings, the Hungerford arms and flanking shields, as well as other coats of arms.

Next, we drove to see the 13th century Cathedral Church of St. Andrews in Wells. I had heard they had 365 carved Biblical life size figures. There were many sculptures on the wall outside as well as sculptures inside, and many stain glass windows depicting Biblical stories. The cathedral was very large and had an interesting clock. Every quarter hour the clock strikes, pauses and jousting knights go round in tournament. 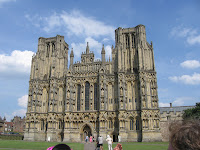 Those are some impressive carvings and the artwork is amazing. I can't wait to someday see even some of the things you've seen.