Today I’m telling you about some of the cathedrals and churches we saw while in England.

Never before had I seen a building as magnificent as the Durham Cathedral. They built it in 1093 and it’s huge. Inside was more beautiful than any of you can imagine. I had no idea that this was just the beginning of many more breathtaking churches that we would be seeing while in England. 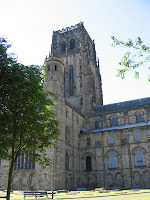 Just next door, in the Durham Castle were two small churches. They built the Normal chapel around 1078 and the larger Tunstall chapel several years later in 1540. They didn't allow you to take pictures inside. 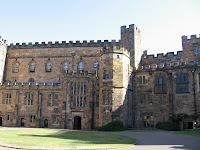 My sister and I visited many out of the way places. We were traveling the paths our ancestors before us had been. In the village of Scrooby, in Nottinghamshire, we found a church built about 1380, called St. Wilfred. It was a simple church built with limestone, and was the most prominent building in Scrooby. The steeple is octagonal on a square tower base. I was surprised to see that most of the churches in England have a graveyard. 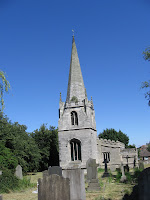 One mile north of Scrooby, in Austerfield, they built the St. Helena’s church in 1080. We learned that at the church font about 1589, they baptized the famous pilgrim, William Bradford. Above the door in the church's south porch is a dragon carved about nine hundred years ago.

[I'll keep trying to post the picture here, but so far, no such luck]

The next church we stopped at was the Saint Mary’s Church in Granthan. 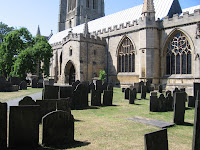 That's all for today.

You have such beautiful pictures of those old churches. You should print them and use them on cards. (I do, and they make wonderful note cards.)

Beautiful! I can't wait until I can go see some of these things.