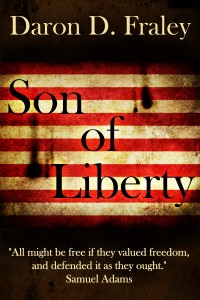 This story is a direct result of Daron's recent quest to learn more about the Founding Fathers and the events that led up to the American Revolution—incredibly inspiring stories that he had never heard of before: The Loyal Nine, the Culper Spy Ring, and the Sons of Liberty, for example. Although not directly connected to any of those events, in Son of Liberty he gave a nod of appreciation for some of the heroes and symbols of that day.

I like the cover and it will draw many people's attention.

This book by Daron D. Fraley is amazing. He is a fantastic writer. I love the descriptions that he gave in the book. It flowed from the very beginning and made me want to keep turning the pages. I loved the story he was telling. Then it ended. I wanted more before the last chapter. I didn't want it to end the way it did. His characters were likeable and I wanted to know them and watch them as they continued to help other people.

I wish the story was longer and that he had continued a little longer. The story was intiguing and one I would like to have kept reading. I was ready to give the book to my 14-year-old grandson because I thought it was something he would love, but then I didn't want to see him disappointed when it ended so abruptly.