Defenders of the Covenant by Angie Lofthouse 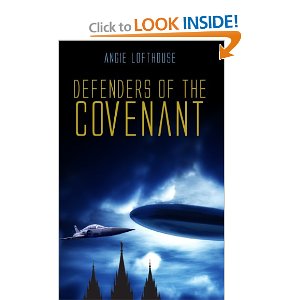 I did an interview with the author, Angie Lofthouse and here are the questions and answers.


C = How old were you when you started writing?


A = I started writing with the intent to become a published author when I was 22 years old. Before that, I loved reading and thought I'd like to try my hand at writing, but I lacked the confidence. Fortunately, a supportive hubby helped push me in the right direction.


C = When did this book start to form in your mind? Did it come quickly or did you have struggles?


A = The idea came to me way back in 1997-98 when I was expecting my third child. I was excited about it, but as with everything I've written, it took a lot of work to get from shiny idea to finished product. I did tons of research for it, too. I really enjoyed that process.


C = What was the inspiration for this book?


A = The idea first started when I sat in the temple and asked myself how far I would go to keep those covenants. What might I have to sacrifice? My mind came up with a most extreme case of a woman having to actually give up her baby to the church because of an alien invasion. How would the church respond to an alien invasion? I wrote a short story about it that wasn't very good, but then I found I wanted to write about those children and how they might save the earth when they got older. Defenders of the Covenant was born. Recently, I turned the bad short story into a novella prequel to the novel called "Consecrated." I personally feel it's some of the best writing I've done. I hope I get to share it with the world soon.


C = What other books do you have published?


A = This is my first novel, but I have published a dozen short stories in print and online magazines. You can read most of them for free on my website: www.angielofthouse.com I also have a Christmas story in the anthology, Stolen Christmas and another Christmas story will be published in a collection due out this fall.


C = What other books are you in the process of writing?


A = At the moment, I am revising a sequel to Defenders of the Covenant called The Ransomed Returning. Though Defenders stands alone, I liked the idea of continuing the adventures of the characters as they work to build Zion. I am also nearly finished with the first draft of a third book in the series, Shattered Skies.


C = Any suggestions for someone who is trying to write a book?


A = Instead of "write what you know," I recommend "write what you love!" You can always find out the stuff you don't know. I believe you should follow your passion and have fun! Keep writing all the time and never, ever give up!


C = When is your next book going to be available?


A = Not sure on that. I hope to finish revising it and get it submitted within the month. It should be available a few months after that!


A = I love creating characters and sending them on adventures, putting them through trials and giving them happy endings. I love being able to share my work with others and having them respond to it. I love to let my imagination run wild, and I love that I can be sitting around daydreaming and legitimately be able to claim that I am working.


Now for a little about the book and the review:


Hannah and her friends have been warned about the danger lurking outside of their secret refuge from the alien invaders who devastated Earth years before. The teenagers’ leaders have raised them in the Latter-day Saint faith, teaching them to trust God, but when McKenzie and her rebellious boyfriend Jeremy decide to run away, Hannah and Derek follow, determined to bring their friends home.


Once outside, the four teens soon realize they cannot return to the refuge without endangering everyone there. Captured, enslaved, and separated, Hannah, Derek, and McKenzie each learn the unique role they must play in liberating the earth. The friends must battle with android soldiers and attack vessels, and face their own inner struggles to overcome the invaders., After all, not even an alien invasion can stop the work of God.


One of my favorite chapters was six. I could actually see the scene as the author described Derek sifting through the rubble, looking for anything of value. His main focus was getting back home to safety, but his heart nearly stopped beating when he discovered among all the wreckage a building that he recognized. I cheered as he made his escape.


I was impressed that among all the fighting scenes the author still had Brother Ancient remind Hannah that, “You have a gift to reach out to our hearts with music. You must use this gift.”


There was plenty of action and also some romance scenes, and most LDS people would really enjoy this book. It gave me a lot to think and wonder about.

Nice interview. I can't wait to read this book as I'm a huge SciFi lover.

Thanks so much, Connie!

Great interview, Connie and Angie! I've read the book and LOVED it too!

Thanks so much, Connie! Thank you too, Donna.!

The Damsel in Dis Dress said...

Sounds exciting! Thanks for the great review.

I liked hearing some specific parts you liked. Nice thing to add in a review.

I liked hearing some specific parts you liked from the book. Thanks for sharing.