The one thing I never tired of on my trip to Europe in 2006 was the endless castles. They were all different, and each had something unique that I liked. The pictures are all mine, taken with my new digital camera received the prior Christmas in anticipation of this trip. I’ll confess I’m not a photographer.

I know I’ve mentioned it before, but since it was my first castle, I have to mention the Dumbarton Medieval Castle ruins. I liked the fact that in the 9th century it served as the Viking’s headquarters. Another interesting story is the castle protected Mary, Queen of Scots, while she was a young girl until her safe removal to France.

Next, we drove to the Isle of Bute, and saw the circular Rothesay Castle ruins. I also mentioned this one before but didn’t mention that strolling among the ruins was intriguing. In fact, I was so enthralled I forgot to take any pictures.

Before leaving Scotland, we had to see the Edinburgh Castle. All of the streets inside the castle were cobblestone, which was difficult to walk on. We were fortunate to get a ride to the top of the huge castle where you could see a splendid view of the entire city. The most fascinating room was the heavily guarded one with Scotland‘s glittering crown jewels. The Saint Margaret Chapel was beautiful, and is the oldest building in the city. We took time to visit the Scottish National War Memorial. Everyone was excited to watch the one o’clock gun ceremony. They have fired the guns almost every day except Sunday since 1861. This was a busy castle, but well worth the time to visit. 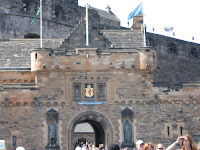 Connie, you always have the most beautiful pictures. I'd LOVE to go on a castle-visiting trip. I hope when I'm your age I'll have as much experience as you. You've truly lived--or at least, truly traveled.